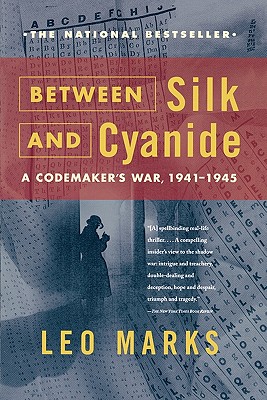 BETWEEN SILK AND CYANIDE: A Codemaker's War, 1941-

In 1942, Leo Marks left his father's famous bookshop, 84 Charing Cross Road, and went off to fight the war. He was twenty-two. Soon recognized as a cryptographer of genius, he became head of communications at the Special Operations Executive (SOE), where he revolutionized the codemaking techniques of the Allies and trained some of the most famous agents dropped into occupied Europe, including "the White Rabbit" and Violette Szabo. As a top codemaker, Marks had a unique perspective on one of the most fascinating and, until now, little-known aspects of the Second World War.
Writing with the narrative flair and vivid characterization of his famous screenplays, Marks gives free rein to his keen sense of the absurd and his wry wit, resulting in a thrilling and poignant memoir that celebrates individual courage and endeavor, without losing sight of the human cost and horror of war.

Title: BETWEEN SILK AND CYANIDE: A Codemaker's War, 1941-

BETWEEN SILK AND CYANIDE: A Codemaker's War, 1941-