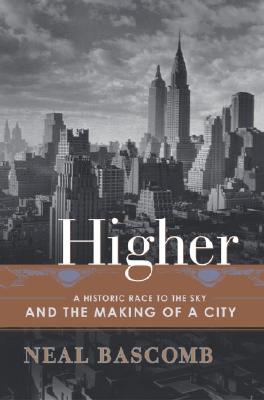 HIGHER : A HISTORIC RACE TO THE SKY AND

The Roaring Twenties in New York was a time of exuberant ambition, free-flowing optimism, an explosion of artistic expression in the age of Prohibition. New York was the city that embodied the spirit and strength of a newly powerful America.
In 1924, in the vibrant heart of Manhattan, a fierce rivalry was born. Two architects, William Van Alen and Craig Severance (former friends and successful partners, but now bitter adversaries), set out to imprint their individual marks on the greatest canvas in the world--the rapidly evolving skyline of New York City. Each man desired to build the city's tallest building, or 'skyscraper.' Each would stop at nothing to outdo his rival.
Van Alen was a creative genius who envisioned a bold, contemporary building that would move beyond the tired architecture of the previous century. By a stroke of good fortune he found a larger-than-life patron in automobile magnate Walter Chrysler, and they set out to build the legendary Chrysler building. Severance, by comparison, was a brilliant businessman, and he tapped his circle of downtown, old-money investors to begin construction on the Manhattan Company Building at 40 Wall Street.
From ground-breaking to bricklaying, Van Alen and Severance fought a cunning duel of wills. Each man was forced to revamp his architectural design in an attempt to push higher, to overcome his rival in mid-construction, as the structures rose, floor by floor, in record time. Yet just as the battle was underway, a third party entered the arena and announced plans to build an even larger building. This project would be overseen by one of Chrysler's principal rivals--a representative of the General Motors group--and the building ultimately became known as The Empire State Building.
Infused with narrative thrills and perfectly rendered historical and engineering detail, " Higher" brings to life a sensational episode in American history. Author Neal Bascomb interweaves characters such as Al Smith and Governor Franklin Delano Roosevelt, leading up to an astonishing climax that illustrates one of the most ingenious (and secret) architectural achievements of all time.

Title: HIGHER : A HISTORIC RACE TO THE SKY AND

HIGHER : A HISTORIC RACE TO THE SKY AND