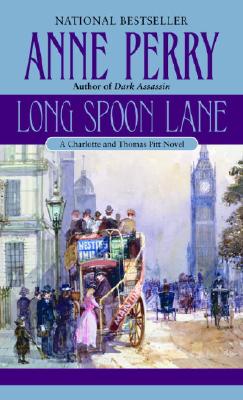 Anne Perry's bestselling Victorian novels offer readers an elixir as addictively rich as Devonshire cream or English ale-enticing millions into a literary world almost as real as the original. While flower sellers, costermongers, shopkeepers, and hansom drivers ply their trades, the London police watch over all. Or so people believe. . . .
Early one morning, Thomas Pitt, dauntless mainstay of the Special Branch, is summoned to Long Spoon Lane, where anarchists are plotting an attack. Bombs explode, destroying the homes of many poor people. After a chase, two of the culprits are captured and the leader is shot . . . but by whom?
As Pitt delves into the case, he finds that there is more to the terrorism than the destructive gestures of misguided idealists. The police are running a lucrative protection racket, and clues suggest that Inspector Wetron of Bow Street is the mastermind. As the shadowy leader of the Inner Circle, Wetron is using his influence with the press to whip up fears of more attacks-and to rush a bill through Parliament that would severely curtail civil liberties. This would make him the most powerful man in the country.
To defeat Wetron, Pitt finds that he must run in harness with his old enemy, Sir Charles Voisey, and the unlikely allies are joined by Pitt's clever wife, Charlotte, and her great aunt, Lady Vespasia Cumming-Gould. Can they prevail? As they strive to prevent future destruction, nothing less than the fate of the British Empire hangs in precarious balance.
From the first sentence to the last, "Long Spoon Lane" is a miracle of suspense, of plot and counterplot, bluff and counterbluff, in a take-no-prisoners battle between good and evil. It is possibly the very best of all the wonderful Charlotte and Thomas Pitt novels.