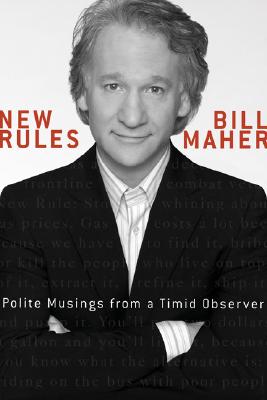 Bill Maher is on the forefront of the new wave of comedians who have begun to influence and shape political debate through their comedy. He is best known not just for being funny, but for advocating truth over sensitivity and taking on the political establishment.
Maher first came to national attention as the host of the hit ABC-TV program "Politically Incorrect," where he offered a combustible mixture of irreverence and acerbic humor that helped him to garner a loyal following, as well as a reputation for being a controversial bad boy.
Bill Maher's popular new HBO television show, "Real Time," has put Maher more front and center than ever before. Partic-ularly one regular segment on the show, entitled "New Rules," has been a hit with his ever-growing legion of fans. It is the part of the show during which Maher takes serious aim, bringing all of his intelligence, incisiveness, wit, and his signature exasperation to bear on topics ranging from cell phones ("I don't need my cell phone to take pictures or access the Internet. I just need it to make a phone call. From everywhere Not just the places it likes ") to fast food ("No McDonald's in hospitals. I'm not kidding ) to the conservative agenda ("Stop claiming it's an agenda. It's not an agenda. It's a random collection of laws that your corporate donors paid you to pass.")
His new book, the first since his bestselling "When You Ride ALONE You Ride with bin Laden," brings these brilliantly conceived riffs and rants to the written page. Appropriately titled "New Rules," the book will collect some of the best of the rules derived from previously written material and will also contain substantial new material, including some longer form "editorials"--of course with a twist and bite that only Bill Maher can deliver.