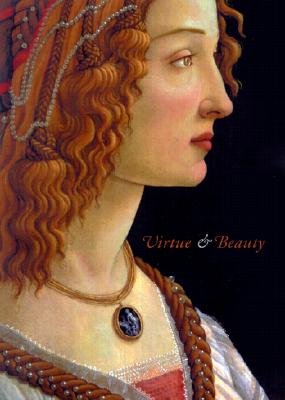 This beautifully illustrated and exquisitely designed volume of paintings, sculpture, medals, and drawings celebrates the extraordinary flowering of female portraiture, mainly in Florence, beginning in the latter half of the fifteenth century. Included are many of the finest portraits of women (and a few of men) by Filippo Lippi, Domenico Ghirlandaio, Antonio Pollaiuolo, Botticelli, Verrocchio, and Leonardo da Vinci--whose remarkable double-sided portrait of Ginevra de' Benci, which departs notably from tradition, is the focus of special attention.

It was in Florence during this period that portraiture expanded beyond the realm of rulers and their consorts to encompass women of the merchant class. This phenomenon, long known to scholars, is here presented to a larger audience for the first time. The catalogue, which accompanies an exhibition at the National Gallery of Art, traces how the humanist praise of women influenced and enlivened their depiction. It also considers how meaningful costumes and settings were chosen. Works from outside Florence by such masters as Pisanello, Rogier van der Weyden, and Ercole Roberti shed additional light on the evolution of female portraiture during the century from c. 1440 to c. 1540.

An introduction by editor and exhibition organizer David Alan Brown and four engaging essays by other experts on Renaissance art--Dale Kent, Joanna Woods-Marsden, Mary Westerman Bulgarella and Roberta Orsi Landini, and Victoria Kirkham--perfectly complement the more than one hundred illustrations, which include ninety-seven full-color plates. The catalogue entries are concise while revealing the key aspects of each portrait--from style and sources to ongoing scholarly debates. This elegant, enlightening book is itself a telling portrait not only of the art but also of the broader issues of women's freedom, responsibility, and individuality in a most exceptional era.