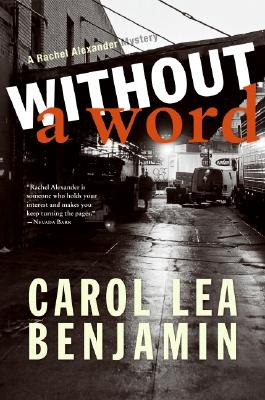 WITHOUT A WORD : A RACHEL ALEXANDER MYST

Critics around the country have consistently praised Shamus Award-winning author Carol Lea Benjamin for her razor-sharp writing, stylish plotting, and characters so rich and fully fleshed that you feel as if you've known them all of your life. Now, in a tale of family secrets and heartbreaking betrayals, Benjamin lifts the private-eye novel to new heights -- planting herself firmly in the ranks of the most respected crime novelists writing today.

In a city where enemies are as easy to come by as friends and where paranoia is the norm, private investigator Rachel Alexander is surprised to see someone waiting for her at New York City's Washington Square Park dog run, where she takes her pit bull, Dashiell, for his daily R&R. When the distraught man asks her to find his missing wife, Rachel accepts the case reluctantly. After all, the chances of finding a woman who disappeared without a trace -- and without a word -- five years earlier are slim. But Rachel is touched by the missing woman's daughter, a troubled young girl who has been mute since her mother disappeared and who is now suspected of the brutal stabbing murder of her doctor.

Although the girl can't, or won't, speak for herself, Rachel believes she is innocent and is determined to find a way to communicate with her in order to discover the truth and clear her name. Against a backdrop of infidelity, neglect, and a city at times as lonely and frightening as a child's worst nightmares, Rachel's involvement in the case uncovers issues more complex, and more tragic, than she's ever seen, eventually exposing problems that someone is willing to die, or even kill, for.

Mining the underbelly of New York City's oldest and most fascinating neighborhoods and exploring its rich tapestry of people, Without a Word is a gripping and unforgettable work from one of mystery's most talented authors.

Title: WITHOUT A WORD : A RACHEL ALEXANDER MYST

WITHOUT A WORD : A RACHEL ALEXANDER MYST