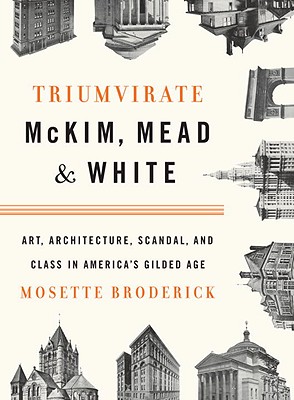 A rich, fascinating saga of the most influential, far-reaching architectural firm of their time and of the dazzling triumvirate--Charles McKim, William Mead, and Stanford White--who came together, bound by the notion that architecture could help shape a nation in transition. They helped to refine America's idea of beauty, elevated its architectural practice, and set the standard on the world's stage.
Their world and times were those of Edith Wharton and Henry James, though both writers and their society shunned the architects as being much too much about new money. They brought together the titans of their age with a vibrant and new American artistic community and helped to forge the arts of America's Gilded Age, informed by the heritage of European culture.
McKim, Mead & White built houses for America's greatest financiers and magnates: the Astors, Joseph Pulitzer, the Vanderbilts, Henry Villard, and J. P. Morgan, among others . . . They designed and built churches--Trinity Church in Boston, Judson Memorial Baptist Church in New York, and the Lovely Lane Methodist Church in Baltimore . . .
They built libraries--the Boston Public Library--and the social clubs for gentlemen, among them, the Freundschaft, the Algonquin of Boston, the Players club of New York, the Century Association, the University and Metropolitan clubs. . . .
They built railroad terminals--the original Pennsylvania Station in New York City--and the first Roman arch in America for Washington Square (it put the world on notice that New York was now a major city on a par with Rome, Paris, and Berlin). They designed and built Columbia University, with Low Memorial Library at the centerpiece of its four-block campus, and New York University, and they built, as well, the old Madison Square Garden whose landmark tower marked its presence on the city's skyline . . .
Mosette Broderick's" Triumvirate" is a book about America in its industrial transition; about money and power, about the education of an unsophisticated young country, and about the coming of artists as an accepted class in American society.
Broderick, a renowned architectural and social historian, brilliantly weaves together the strands of biography, architecture, and history to tell the story of the houses and buildings Charles McKim, William Mead, and Stanford White designed. She writes of the firm's clients, many of whom were establishing their names and places in upper-class society as they built and grabbed railroads, headed law firms and brokerage houses, owned newspapers, developed iron empires, and carved out a new direction for America's modern age.