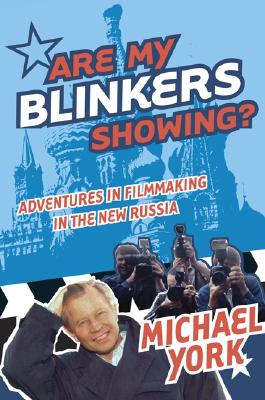 ARE MY BLINKERS SHOWING?: Adventures in Filmmaking

He was the raging, youthful Tybalt in Franco Zeffirelli's classic film Romeo and Juliet. He was a divinely decadent foil to Liza Minnelli's divinely decadent Sally Bowles in Bob Fosse's Oscar-winning Cabaret. And he won over an entirely new generation in the Austin Powers movies. Now Michael York is off to make the biggest independent film in Russian history-in the capitalist Wild Wild West that is today's Russia. York is co-starring alongside the 300-pound, 6-foot-6-inch Russian bodybuilder Alexander Nevsky (think Arnold Schwarzenegger) in an action film called Moscow Heat. With a self-deprecating wit reminiscent of Charles Grodin in It Would Be So Nice If You Weren't Here, an eye trained on the imponderables of day-to-day life (especially in faraway places-what on earth did the hotel's laundry list mean by the mysterious men's garment it called "blinkers"?), and with an increasingly alarmed sense of how the new Russia, for all its capitalist trappings, is becoming ever more like the old Russia under an ever more autocratic government, Michael York has crafted a deliciously readable insider's account that transcends genre. There's much here to be found about the actor's craft, much to be found about Russia then and now-but most of all there is the singular pleasure of being in the company of a witty and delightfully articulate observer of people, places, and the remarkable adventure called moviemaking.

Title: ARE MY BLINKERS SHOWING?: Adventures in Filmmaking

ARE MY BLINKERS SHOWING?: Adventures in Filmmaking