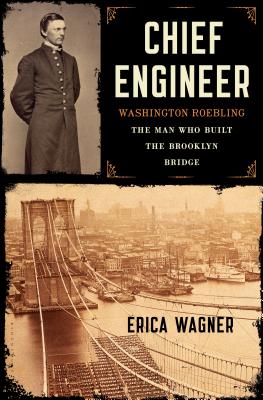 CHIEF ENGINEER: Washington Roebling, the Man Who B

The first full biography of a crucial figure in the American story--Washington Roebling, builder of the Brooklyn Bridge.

"I know that nothing can be done perfectly at the first trial; I also know that each day brings its little quota of experiences, which with honest intentions, will lead to perfection after a while." --Washington Roebling

His father conceived of the Brooklyn Bridge, but after John Roebling's sudden death, Washington Roebling built what has become one of American's most iconic structures--as much a part of New York as the Statue of Liberty or the Empire State Building. Yet, as recognizable as the bridge is, its builder is too often forgotten--and his life is of interest far beyond his chosen field. It is the story of immigrants, of the frontier, of the greatest crisis in American history, and of the making of the modern world.

Forty years after the publication of The Great Bridge, David McCullough's classic chronicle of how the East River was spanned, Erica Wagner has written a fascinating biography of one of America's most distinguished engineers, a man whose long life was a model of courage in the face of extraordinary adversity. Chief Engineer is enriched by Roebling's own eloquent voice, unveiled in his recently-discovered memoir that was previously thought lost to history.

The memoir reveals that his father, John-a renowned engineer who made his life in America after humble beginnings in Germany-was a tyrannical presence in Washington's life, so his own adoption of that career was hard won. A young man when the Civil War broke out, Washington joined the Union Army, building bridges that carried soldiers across rivers and seeing action in many pivotal battles, from Antietam to Gettysburg-aspects of his life never before fully brought to light. Safely returned, he married the remarkable Emily Warren Roebling, who would play a crucial role in the construction of the unprecedented Brooklyn Bridge. It would be Washington Roebling's grandest achievement-but by no means the only one.

Elegantly written with a compelling narrative sweep, Chief Engineer will introduce Washington Roebling and his era to a new generation of readers.

Title: CHIEF ENGINEER: Washington Roebling, the Man Who B

CHIEF ENGINEER: Washington Roebling, the Man Who B