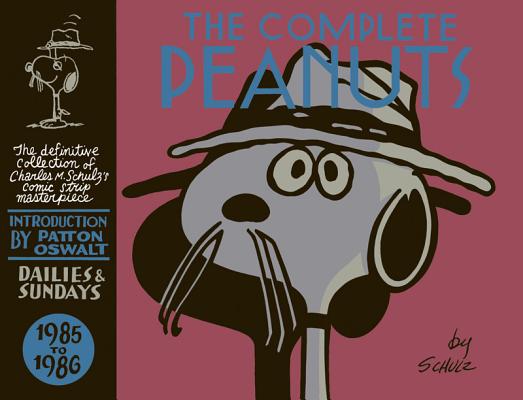 Peanuts reaches the middle of the go-go 1980s in this book, which covers 1985 and 1986: a time of hanging out at the mall, "punkers" (you haven't lived until you've seen Snoopy with a Mohawk), killer bees, airbags, and Halley's Comet. And in a surprisingly sharp satirical sequence, Schulz pokes fun at runaway licensing, with the introduction of the insufferably merchandisable "Tapioca Pudding." Also in this volume: Peppermint Patty wins the "All-City School Essay Contest" with her "What I Did During Christmas Vacation" essay, but snatches defeat from the jaws of victory with a disastrous acceptance speech... Charlie Brown, Linus, Sally and Snoopy go to "rain camp" one year, and "survival camp" the next... The World War One Flying Ace gets the flu and is nursed back to health by a French Mademoiselle (Marcie)... Sally gives Santa Claus a heart attack (literally )... Lucy talks Charlie Brown into posing in swim-trunks for their school's "Swimsuit issue..". Peppermint Patty gains a crabby tutor... Linus suffers a crisis when addressed for the first time as "Mister..". plus another return appearance by Molly Volley, Snoopy's accidental destruction of his dog house (with a cannon ), and lots of near-Beckettian strips set in the desert starring this volume's cover boy, the one and only Spike It's another two years of hilarious, heartwarming strips from the great Charles M. Schulz.