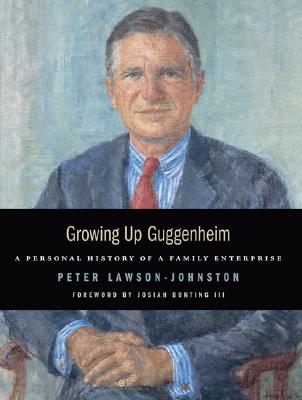 In Growing Up Guggenheim, Peter Lawson-Johnston, a Guggenheim himself, and the board president who oversaw the transformation of the renowned museum from a local New York institution to a global art venture, shares a personal memoir that includes intimate portraits of the five people principally responsible for the entire Guggenheim art legacy. In addition to first-hand biographical accounts of his grandfather Solomon Guggenheim (the museum's founder), his cousin Harry (Solomon's successor), and his famously rebellious cousin Peggy (whose magnificent Venice art collection he helped bring under New York Guggenheim management), the author tells the stories of long-time museum director Thomas Messer, who initiated the bold expansion of Frank Lloyd Wright's original museum building, and current director Thomas Krens, whose controversial tenure has featured such innovations as the Guggenheim's wildly successful first international outpost in Bilbao, Spain, and exhibits devoted to fashion and motorcycles. Lawson-Johnston also traces his own career, from his first job as sales manager of a remote feldspar mine, to his rapid ascent to the family summit, to his extension of the Guggenheim legacy in ways none of his predecessors could have envisioned. Despite his native and tangible humility, this evocative narrative makes clear Lawson-Johnston's indispensable role as the loyal steward of one of America's most famous family enterprises.