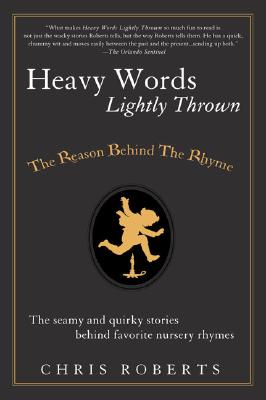 Was Little Jack Horner a squatter? ?Baa Baa Black Sheep? a bleat about taxation? What did Jack and Jill do on that hill? Who was Mary? And why was she contrary?

You?ll never see Mother Goose in the same way again. BACKCOVER: Praise for "Heavy Words Lightly Thrown: "
?What makes HWLT so much fun to read is not just the wacky stories Roberts tells, but the way Roberts tells them. He has a quick, chummy wit and moves easily between the past and the present, making connections between the way people acted then and the way we act now, and sending up both.?
?"Orlando Sentinel"
?Roberts employs a decidedly playful approach in analyzing the rhymes.?
?"Chicago Tribune"
?Roberts deploys an informal style of scholarship to a dazzling effect, transforming a catalogue of familiar nursery rhymes into a treasure trove of tantalizingly slippery archaisms, hidden etymological layers, arcane associations and buried meanings. This is better than history lite--it's history made delightful.?
?"Publishers Weekly" (starred review)
?HWLT is obviously a labor of love, performed by a man obsessed with language, history, but intent on making the education of his readers a joyous experience.?
?"Milwaukee Journal-Sentinel"
?a loving, in-depth look at history, the human condition, and why words and the way they are used matters so much.?
?"Sunday Denver Post and Rocky Mountain News"
?a lighthearted, often hilarious look at the human condition and a fascinating exploration of how words can shape mythology and culture.?
?"Syracuse Post-Standard"
) ?A fascinating slice of history with quirky, unexpected and often scandalous tales.?
?"Providence Sunday Journal"
?An intriguing & informative historical trip through those odd little songs I sang as an odd little child. A must-have for anyone who has ever been younger than they are now.?
?Angus Oblong, creator of ?The Oblongs? animated series & author of "Creepy Susie: And 13 Other Tragic Tales for Troubled Children"
?James Finn Garner, author of "Politically Correct Bedtime Stories"