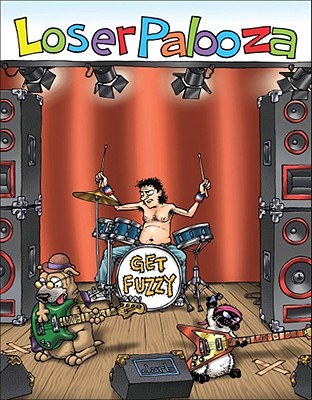 LOSERPALOOZA: A GET FUZZY TREASURY

On the Media calls Darby Conley "the most successful cartoonist of the new generation." --National Public Radio

* More than one million Get Fuzzy books have been sold-and the three most recent books have been New York Times best-sellers. Loserpalooza is the third treasury, collecting strips from New York Times best-sellers Say Cheesy and Scrum Bums. Loserpalooza is Darby Conley's latest look at the interspecies antics of his wildly popular characters Bucky, Satchel, and Rob. At the center of this not-so-warm-and-fuzzy arrangement is Rob Wilco, a single, mild-mannered ad exec. Bucky is Rob's temperamental, buck-toothed Siamese cat with a penchant for mischief, a hatred of ferrets, and a love of rubber bands. Satchel is a sweet but naive shar-pei-yellow-Lab mix who haplessly ends up on the receiving end of Bucky's wayward schemes. An entertaining critique on popular culture and a bona fide hit, Get Fuzzy was named Best Comic Strip of the year in 2002 by the National Cartoonists Society and now appears in more than 400 newspapers worldwide.

Title: LOSERPALOOZA: A GET FUZZY TREASURY

LOSERPALOOZA: A GET FUZZY TREASURY