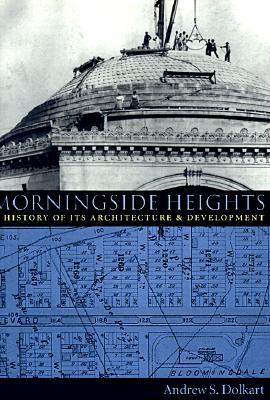 MORNINGSIDE HEIGHTS: A History of Its Architecture

In this extensively illustrated book, Andrew S. Dolkart explores the architecturally varied complexes built by these organizations. He traces the successes and failures of each building project, as trustees and supporters struggled to raise funds in order to construct great campuses in a city where residents were not always generous in their support of such endeavors. Commissioning designs from some of city's and the nation's leading architects, the Morningside Heights institutions created a richly diverse ensemble of buildings. The book tells the stories of the excitement surrounding the initial plans for an Episcopal cathedral and the ultimate failure of this grandiose project; the efforts of John D. Rockefeller, Jr. to build a rival nondenominational church (Riverside Church); the development of Charles McKim's inspired designs for Columbia's campus; the efforts of Barnard and Teachers College to build impressive campuses adjacent to Columbia; and the later projects of Union and Jewish theological seminaries and the Institute of Musical Art (late the Julliard School) to erect buildings that would be part of the larger institutional concentration, but world provide each with a unique architectural identity. Dolkart also traces the history of the surrounding residential neighborhood, providing the first comprehensive analysis of the design and construction the early-twentieth-century speculative apartment houses that typify so many New York neighborhoods. Based on extensive research and incorporating more than 200 photographs, Morningside Heights will appeal to anyone interested in architecture, urban development, or the history of New York City, as well as those associated with the neighborhood or its institutions.

Title: MORNINGSIDE HEIGHTS: A History of Its Architecture

MORNINGSIDE HEIGHTS: A History of Its Architecture