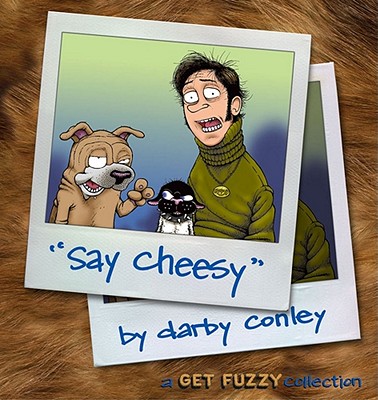 SAY CHEESY : A GET FUZZY COLLECTION

Dogs and cats can be cute, cuddly, and faithful companions. They also can be ornery, unpredictable, and hilarious. Get Fuzzy is all about the latter. In this collection, New York Times best-selling author Darby Conley has found uncommon humor and insight in our common, everyday pets. Get Fuzzy has become one of the premier comics on the funny pages. The Wilco household includes Rob the bachelor, Bucky, the cantankerous cat with an attitude, and Satchel, the loveable-but-clueless dog. If animals really could talk, one would expect them to sound like Bucky and Fuzzy. Often, it's the subtle nuances of the strip-from Bucky's hilarious facial expressions to Satchel's dopey innocence-that pack the biggest laughs. The strip's dry wit and razor-sharp reality earned it the National Cartoonists Society's prestigious Best Newspaper Comic Strip in 2002. Get Fuzzy captures the non-glamorous essence of being a pet owner in a way people who own and operate dogs and cats are sure to love.

SAY CHEESY : A GET FUZZY COLLECTION