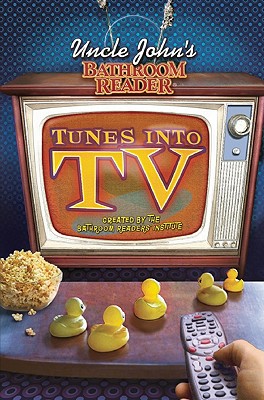 What does Homer Simpson call "friend...mother...secret lover?" Television, you meathead Here comes your wacky neighbor Uncle John to present TV the way only he can. From test patterns to Top Chef, from My Three Sons to Mad Men, as well as TV news, advertising, scandals, sitcoms, dramas, reality shows, and yadda yadda yadda, Uncle John's Bathroom Reader Tunes into TV is "dy-no-mite " Read about... * Gilligan's seven deadly sins
* The inside story of TV's first commercial
* What goes on behind the scenes of Jeopardy
* The most incredibly bizarre shows from around the world
* Why Gene Roddenberry tried to beam the original Star Trek cast into space
* What reality show producers don't want you to know
* How the King of Late Night crushed his competition
* What really went down on the island of LOST
* Unexpected sitcom fatalities
* TV's greatest chimps
And much, much more